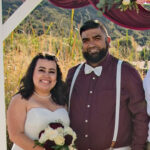 Mike has been a native to west Texas since birth. He first began attending Levelland First Assembly in his teen years. The youth pastors, at that time, made a huge impact on Mike’s life… one that could never be forgotten. As he became a young adult, he walked his own path and stopped attending church. Little did he know God had much bigger plans in store for him. Mike became a father to his beautiful daughter in 2001. She is currently a South Plains College student. Mike met his wife in 2015 and found himself back at Levelland First Assembly. In 2020 he began assisting with Royal Rangers and soon after got appointed to be the pastor of the youth department in March of 2021. He has a very clear vision of what God has in store for this generation of teens and is eager to follow this vision.  Mike’s favorite verse is, “I am the way and the truth and the life. No one comes to the Father except through me.” John 14:6

Jessika, Mike’s wife, was born in Dallas Texas, but soon after moved to west Texas where she was raised. Church wasn’t in her upbringing, but as she got older, she knew there was something missing in her life. She began attending Levelland First Assembly in 2010.  She graduated with an associate degree in Paralegal Studies from South Plains College in 2014. Since graduating she has enjoyed working in the legal field, but is currently weighing her options to continue her education in a different profession. Jessika has always had a heart for teaching and has been one of our MPact leaders for over four years now, where she will continue alongside the youth department. Her favorite verse is, “I can do all things through Christ who strengthens me.” Philippians 4:13

Mike and Jessika married each other in 2018. While they are complete opposites, they share a love for spending time with family and their fur babies (two cats and a husky), traveling, good food, and Jesus. While ministry is something new to them, they couldn’t be more excited to walk this path the Lord has led them on.