A little about Pastor Mc & Family 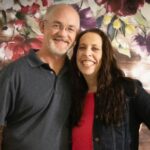 Lacy graduated from Plains High school and attended Angelo State University where he meet is his wife A’ndrea.  He graduated with a B.A. in communications and attended Rhema Bible Training Center for two years.  After graduating from Rhema, he and A’ndrea were married after she finished her B.A. in Journalism from Angelo State and took a position with Joyce Meyer Ministries in Missouri.

In 2006, Lacy took a position as the assistant pastor of Plains Assembly of God church in Plains, TX where he had grown up.  Not long after the move, the McAdams were blessed with their fourth child in 2007.  During their time as associate pastors Lacy applied for and completed his licensing with the Assembly of God.

Lacy and the Sr. pastor, Cecil Van Hoose, reversed roles in 2012 so that Lacy could assume the role of Sr. pastor.  This was done to lighten the role for Br. Van Hoose who was having health issues, and gave Lacy the insight and wisdom of a pastor who had over 45 years of experience.  The transition was smooth and the church body gained from both ministers passing the baton of leadership, yet keeping the vision of the church intact.

In 2016, the McAdams continued to minister in Plains, but moved their home to Sundown, TX.  In 2018, Lacy stepped down from the church in Plains and began teaching at the Sundown middle school for two years before being elected Pastor of Levelland Assembly of God on May 31, 2020.

One of Pastor Mc’s favorite passages is from Mark 12:17